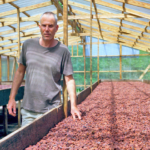 David Laurence Friedman, known by many as Mott Green, was not new to Grenada when he decided to move permanently to the island. As a boy, Mott was a frequent visitor to Grenada as his father, the director of medical services at Coney Island Hospital in New York, taught on the island each winter, often bringing his family along. Visionary, anarchist, idealist, environmentalist. Many appellatives have been given to Mott Green throughout the years, but his actions spoke louder than any nickname he could ever receive. In 1999, together with Doug Browne and Edmond Brown, he founded the first chocolate making company in a cocoa-producing country: The Grenada Chocolate Company. He realized that cocoa farmers could increase their income by processing the same cocoa beans they were growing. Instead of giving their flavorful cacao away to the Grenada Cocoa Association for a fixed price, they could make chocolate (or semi-processed cocoa products) and increase the value of their beans. This revolutionary mindset wasn’t received well by the Grenada Cocoa Association, and Mott was opposed in many ways. He had to fight to get a license to start making chocolate, but eventually managed to open the factory in Saint Patrick’s and start producing the first chocolate made in Grenada with Grenadian cacao. It was the beginning of the tree-to-bar movement in Grenada.

Source: The Fascinating Story Of Chocolate Made In Grenada

We’re delighted to be recognised amongst the ‘Top Vendors’ list of Organic Chocolate Producers. 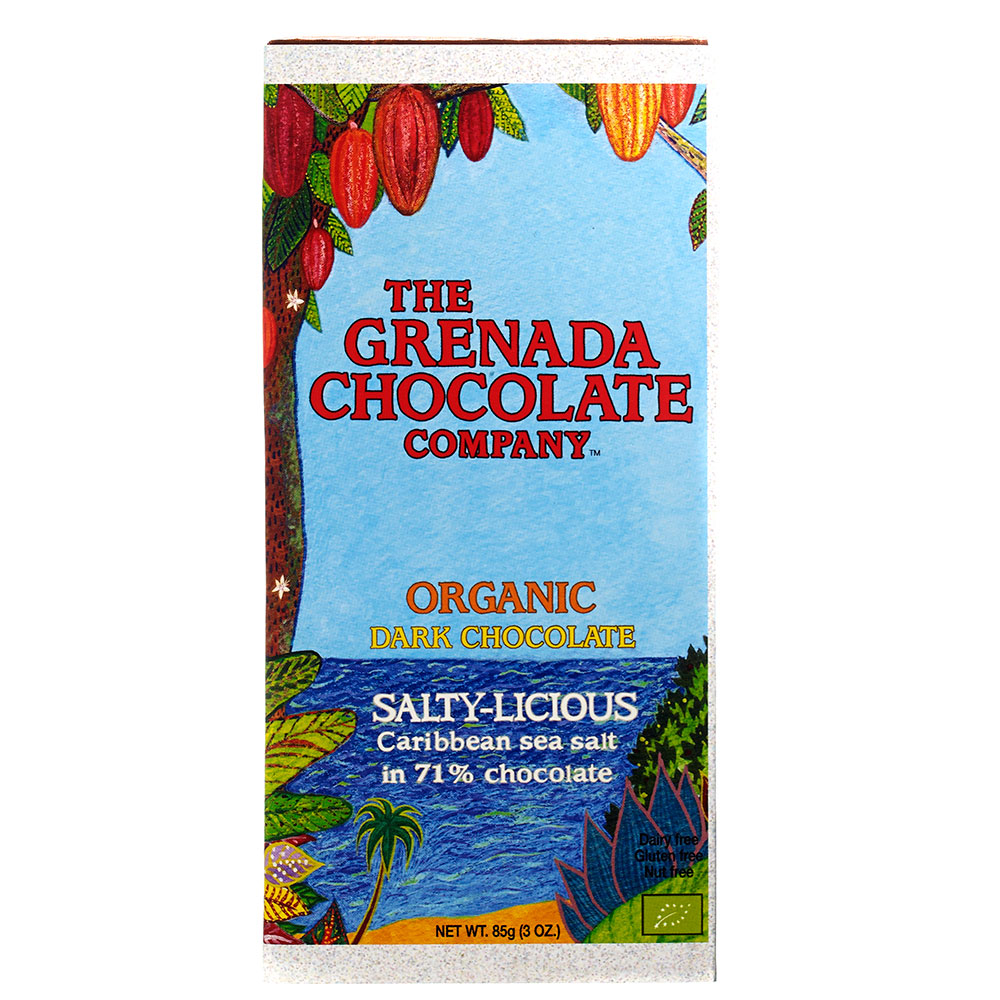 “In short, where the cocoa beans grow matters. And, increasingly, where the chocolate is made is gaining equal billing on the labels of some of the best bars. Most commercially available chocolate contains a blend of bulk, or commodity, cocoa from any number of unnamed places. Chocolate labeled “single-origin” contains co- coa sourced from only one country or region. And every producing country — from Colombia to Papua New Guinea — has something unique to offer. Beans vary from harvest to harvest, and you’ll find diversity within a country as well as in the methods specific chocolate makers use.

About our Grenada Chocolate WSJ say “Among the first origin chocolate makers to gain international recognition, the Grenada Chocolate Company works with small cocoa farmers to create its bars, including the mouthwatering Salty-Licious.”

Chocolate lovers based in the USA can order our bars from our online partners Chocsphere, as well as from outlets in EU and NZ

BBC Saturday PM had a great feature about Grenada and it being the leading light in cocoa and chocolate – hope you can listen to it – appearances from Darin, Edmond and others.

The piece by Nick Davies starts captured here goes on for about 5 minutes. Its really good – please try to listen.

Presenter: [00:00:10] It’s often referred to as the spice island but Grenada is fast gaining a reputation as the cocoa Island. The chocolate industry is worth billions, and there’s a growing demand for the premium and the dark versions. The beans need to make those high-end bars come from a small number of countries, including Grenada. The southern Caribbean island even has a chocolate festival. And the BBC’s Jamaica reporter, Nick Davis, has been there to give us a taste.

Nick Davis: [00:00:34] It’s the start of the Grenada Chocolate Festival, and like any good Caribean gathering, you have music.

Edmund Brown: [00:00:49] Running faster than Karani in the chocolate industry or anybody else as, Magdalena, congratulations!

Nick Davis: [00:00:51] So it’s time to fess up. In Jamaica I make chocolates from bean to bar. I roast the cocoa and then remove the husks, grind the nibs and make chocolate bars. It’s a small side business but it’s something that I enjoy. And I’m here to see how Grenada has become a pioneer in this industry within the Caribbean.

Jeff Shepherd: [00:01:09] It just makes sense with these small islands that actually grow really good cacao to do this kind of [undeciphered].

Nick Davis: [00:01:14] Jeff Shepherd is the owner of Lillybell farms, an artisan chocolatier who is one of the best in the US. I’m a big fan of his signature bar, the modestly named “The most awesome chocolate bar, ever!” He’s seen a growing number of people here in Grenada start to look at doing more with the beans they grow.

Jeff Shepherd: [00:01:31] One of the big things that I promote, because I’ve always used organics and I totally believe in sustainability, is this kind of value added product. People aren’t just picking cocoa and drying it and selling it. They’re actually producing that chocolate in getting all of the money for it.

Edmund Brown: [00:01:48] OK, so we would like everyone to make our way to the buses because we’re now going to go on our way up to the chocolate factory.

Nick Davis: [00:01:53] Most of the chocolate we grown in West Africa using bulk cocoa which sells from between three and three and a half thousand dollars a ton. But there’s another grade, fine flavor cocoa, and that’s only in a small number of countries and used in high end chocolates. It costs more to buy, between three thousand five thousand dollars a tonne, and Grenada produces some of the best.

Nick Davis: [00:02:20] The Grenada Chocolate company is a co-operative of farmers and chocolate makers producing organic chocolate. Their award winning bars are sold across the world. Edmund Brown is one of the co-founders. He says a business structure and paying more for organic beans allows more local people to benefit.

Edmund Brown: [00:02:49] Well we’re taking people every year, we’re trying to get farmers on board, every year.

Nick Davis: [00:02:55] As I walk through the cocoa trees with chocolate makers, the debate moves on to how little is known about cocoa and chocolate production.

Female: [00:03:03] People have no idea how chocolate’s made let alone where cocoa grows what happens before it’s even roasted, you know?

Nick Davis: [00:03:15] Septimus Modesta is a farmer taking part in the chocolate festival for the first time. He’s never seen how the cocoa bean end up as chocolate and when he hears prices that bars go for abroad it’s upsetting.

Septimus Modesta: [00:03:27] This process is so simple that we should have been able to do it in Grenada a long time. We didn’t even have foreigners so we shouldn’t need foreigners to come here and show us that frankly. I’ve nothing against foreigners, don’t get me wrong.

Dr Darren Sooker: [00:03:44] The first thing that you get with this is citric acid, fruit acid comes first…

Nick Davis: [00:03:48] At a tasting, Dr Darren Sooker, a chocolate expert from the Cocoa Research Centre at the University of the West Indies in Trinidad takes us through the different flavors in a variety of bars.

Nick Davis: [00:04:15] He says there’s new blood in farming. Professionals are buying up agricultural land and seeing cocoa production as an investment.

Dr Darren Sooker: [00:04:23] This is a new class of farmer who is more willing to take a risk, to be more productive, and to capture as much of the value chain as possible. It’s a very, very interesting time. We can either play this hand of cards really really well and win this game or we can muck it up.

Nick Davis: [00:04:39] One man who really hopes he won’t muck it up is Aron Sylvester. He’s the man behind the start-up Trials Chocolate. Born and raised in the U.K. to Grenadian parents, he plans to start manufacturing here soon.

Aron Syvester: [00:04:51] For me it’s about use what I’d learnt and I guess that’s how it kind of works. You really, you start from one place, you go away, you educate yourself, you improve yourself, and the goal, the end game really, is to come back, and then give back.

Nick Davis: [00:05:05] Agriculture was always the main form of trade in Grenada from the 17th century until the mid 1990s when it was replaced by tourism. But now many hope the country’s economy can get a boost from chocolate, to re-cultivate old plantations, and turn the spice island into a cocoa one.

Our thanks to Lucy Daltroff who talked abut the Grenada Chocolate and Mott Green on the World Service and UK\’s Radio 4. and sent us this link:

Half a world away, Lucy Daltroff is on the island of Grenada, drinking in the sights, smells and tastes of a cacao plantation. The Belmont Estate has grown many different crops – including Grenada’s famous nutmeg and mace – but now, thanks to the extraordinary efforts of one barefoot inventor, it is helping build a new business model for the chocolate industry. Will it enjoy the sweet taste of success?

Source: BBC World Service – From Our Own Correspondent, Israeli Settlements and Grenadian Chocolate

Thanks to a sharp eyed reader, it was pointed out that there were a few broken links on our Media page. We had these all along but they somehow got lost during the transfer from Mott’s original site, so for old times sake and to celebrate their re-discovery, we present the recovered audio files here:

(music and lyrics by Akima Paul and Mott Green)
Nibalicious One

(written by Eric Chocolates and performed by his band KISS KISS KILL, Stephen Bluhm and others)

The festival, now in its second year, has been hugely successful. All the events were very well attended and several hundred people took part during the 10-day long events.  This year the festival received outstanding media coverage from the UK, particularly through social media, as well as regional and local media. The festival welcomed farmers, businesses, vendors, artists, families and persons with an interest in cocoa and chocolate and at the end, a silent auction held over the ten days raised EC$7,064. This money will be donated to Vendomme RC Primary School to assist with the purchasing of computers and to Mt. Zion Library in St. George’s to help improve the facilities there. The Grenada Chocolate Festival would not have been a success without the generous support you provided us. We deeply appreciate the willingness with which you have sponsored our efforts to celebrate the quality of cocoa and chocolate produced in Grenada, while contributing to the community. As you know, the festival depends on sponsorship and voluntary support of so many individuals, organizations and businesses and it is our sincere hope that you will join us again in 2016. We have already announced the dates for the 2016 chocolate festival (tentatively April 29th to May 8th) with the theme “Creating Generation Cocoa” and we plan to focus on developing the participation and creativity of the young people. We hope very much that you will be able to join us again in celebrating and raising the profile of Grenada’s cocoa and chocolate. Thank you once again.

A trailer for a documentary that will explore the food security and health crisis faced in Grenada and the wider world cause by industrialization and import dependence by following a small dairy co-operative in our region which is bucking the imported food trend and striving to make sustainability a reality.

All About Bean To Bar May 11th